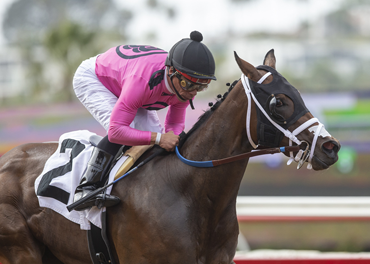 From DMTC Publicity
DEL MAR, Calif. (July 31, 2019) — Making her debut for new owners, odds-on favorite Bulletproof One provided a quick return on their investment as she cruised to an impressive triumph in the featured $100,000 California Thoroughbred Breeders Association Stakes for Golden State Series eligible two-year-old fillies Wednesday at Del Mar.

Also noteworthy Wednesday was the performance of the stable trained by Doug O’Neill, which sent out five winners on the seven-race program, matching the Del Mar record for most winners in a day that the O’Neill barn set July 29, 2015.

In the C.T.B.A. Stakes, Bulletproof One, piloted by Norberto Arroyo, Jr., quickly dashed to the front after the break, shook off longshot Unchain Her Heart turning into the stretch and cruised to the wire six and one-quarter lengths on top in 1:04.70 for the five and one-half furlongs.

Bulletproof One, a daughter of Idiot Proof, was bred by Victory Rose Thoroughbreds & KMN Racing and purchased by Gary Barber, Aron Wellman of Eclipse Thoroughbreds and Adam Wachtel after a second consecutive daylight victory, taking the July 6 Everett Nevin Stakes at Pleasanton by nine and one-quarter lengths after debuting with an eight-length win at Golden Gate Fields in May. Peter Miller trains the filly.

“It was a no-brainer with this being a Cal-Bred race,” said Miller. “We’ve only had her for a few weeks, took it easy with her and just galloped into the race. She came to me in great shape, Ellen (Jackson, the previous trainer) did a great job with her and I’m just thankful for the owners that bought this filly and gave her to me. I’m just happy to be having a great meet with all that I’ve got. Felt like we had good quality, not the quantity like from years past. I’ll take quality over quantity any day of the week.”

Unchain Her Heart held on for second, a half-length in front of Wise Rachel, with Cholula Lips another half-length back in fourth in the field of eight fillies.

O’Neill, five-time leading trainer at Del Mar, began the afternoon with a $49.20 upset by So Gucci in the first, followed with Oil Can Knight at $24.60 in the third, Vegan at $15.80 in the fourth and Convince at $15.40 in the fifth. Acai was eighth and last in the C.T.B.A. Stakes, but Ocean Fury, $6.20, climaxed the afternoon by winning the seventh-race nightcap. None of O’Neill’s winners was favored, although Ocean Fury was a closed second choice.