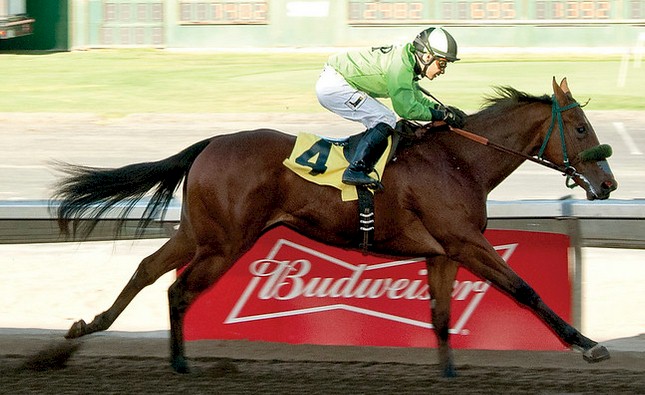 Perfect for Me, a filly by Gig Harbor, won Saturday’s seventh race at Oak Tree at Pleasanton, a maiden special weight for 2-year-old fillies in her second outing. She is from the Royal Academy mare Noe Valley, was bred by Christy Wiebe & Dennis Patterson, is owned by Patterson and trained by Steven Specht. She ran the 5.5 furlongs in 1:06.35 and won by one length at odds of 5-1.

Gig Harbor is out of the St Jovite broodmare Miss Blue Grass. He is a multiple stakes winner and is by the up and coming, now deceased, sire of sires City Zip.

Lexington, KY (September 23, 2017)-As breeders, we often look to a pedigree page trying to infer what has been or what might be passed on from a particular stallion or mare. Here at Plusvital, we aim to empower breeders with tools that can determine exactly what can be passed on from these parents to their offspring, by looking under the hood of the pedigree page and into their DNA.

The Speed Gene Test is a genetic test that has been proven to be an extremely effective breeding tool, that can be used to help assist in mating decisions. The test ultimately predicts the optimum race distance, speed or stamina of a particular individual, however, by having mares and stallions tested, you can control the outcome of a particular mating.

Whether you are a commercial breeding operation that is looking to produce early, well-muscled, precocious looking horses or whether you have the dream of Kentucky Derby glory, using the Speed Gene Test you can breed your desired type more often.

Victory Rose Thoroughbreds are one of many stallion operations that have recently come on board with us here at Plusvital, having made the Speed Gene Type available for Bullet Train (Crestwood Farm KY), Pin Oak Stud stallions and Curlin To Mischief and Haynesfield (both at Rancho San Miguel CA). In doing so they are offering an opportunity for their breeders to control what is passed on from the parents to their progeny.

If you are looking to enquire about getting your mares tested or for further information, please contact Stephen Mulvany on 859.351.3217 or via email on stephen.mulvany@plusvital.com. 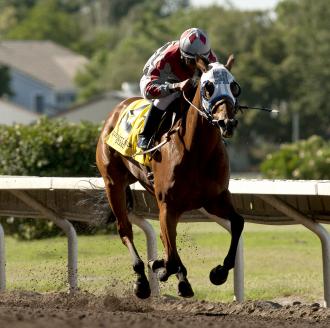 By Chuck Dybdal
Pleasanton, CA (July 8, 2017)-Kimberlea K ($3.80), coming off a sizzling debut victory, controlled the race as she defeated males in the $100,675 Everett Nevin on Saturday at the Oak Tree at Pleasanton meeting at the Alameda County Fair.

The homebred Indian Evening filly was outbroken by second-choice Schulace, and Holy Yodeler was also in front of her in the first 50 yards of the race, but Kimberlea K quickly took command.

Six of the nine runners in the race for Cal-breds were coming off wire-to-wire maiden wins.

Kimberlea K led Schulace, a wire-to-wire winner in his June 2 debut at Santa Anita, by one-half length through a 23.12 opening quarter. She stretched her margin to a full length through a 45.76 opening half-mile.

While Joe Talamo was urging Schulace with left-handed whipping, Frank Alvarado sat cooly and was ahead by two in the stretch. When Alvarado used his whip, Kimberlea K responded nicely, and he then let her finish on her own.

Jacks Masterpiece was third, another length behind Schulace.

In the race just prior to the Everett Nevin, Little Doe, who ran second to Kimberlea K in their debut, scored an easy victory.

“I wasn’t worried about anyone else in the race,” said Alvarado, who won last weekend’s Juan Gonzalez for 2-year-old fillies aboard Song From Above.

“I knew as long as she broke good, we would be OK.”

Trainer Jerry Hollendorfer passed on the Juan Gonzalez because it was only two weeks after Kimberlea K’s debut.

Song From Above, a stalker who defeated males in the first 2-year-old race of the year in Northern California, won the Juan Gonzalez by three lengths in 1:05.24.

“I got lucky that they ran one last week and one today,” said Alvarado, who mentioned after the Juan Gonzalez he was looking forward to riding Kimberlea K in the Everett Nevin.

When asked which of the two fillies was better, Alvarado said, “I won’t make a choice.”

The Indian Evening filly is owned and bred by KMN Racing. She earned $57,000 for her victory and now has a career bankroll of $77,280. 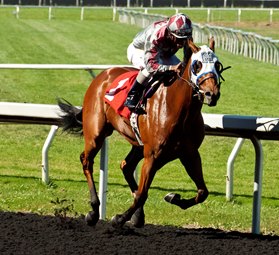 KMN Racing’s homebred had been training steadily at Golden Gate for trainer Jerry Hollendorfer, putting in several speedy timed works prior to facing eight other 2-year-old fillies going five furlongs on the all weather track.

Kimberlea K shot out of the gate and never looked back, leading by eight lengths in the stretch before Little Doe, with Miss Shirley C close behind, closed on her slightly to finish second and third respectively. She completed the distance in :58.2.

Bred in California, Kimberlea K is out of the Pure Prize mare No Better Terms.

Indian Evening, a son of Indian Charlie, was campaigned by Vinery Stables but only made three starts as a 2-year-old. After winning his debut at Woodbine, he placed third in the Three Chimneys Saratoga Special Stakes (G2) at Saratoga Race Course and then went on to win the Swynford Stakes, all in 2011.

Ellen Jackson’s Victory Rose Thoroughbreds in Vacaville, Calif., purchased Indian Evening and he began his career as a stallion in 2014. Indian Evening’s dam, Unenchantedevening, is a half sister to 1997 Horse of the Year Favorite Trick. 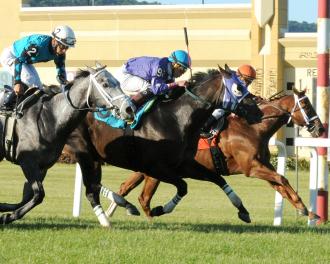 Bold Thunder, at 24-1, outsprinted 3-5 favorite Richard’s Boy for the early lead in the five-furlong turf sprint. Bold Thunder, with Irad Ortiz Jr., was digging in during the stretch run when Ortiz switched from a right-handed stick to a left and hit the 7-year-old. Bold Thunder immediately ducked outward.

Ortiz quickly grabbed a hold but the damage had been done as Bold Thunder herded Richard’s Boy outward several paths.

Jockey Paco Lopez, who was beaten a head on Richard’s Boy, lodged an objection and the stewards reversed the order of finish.

“He carried my horse out, and then my horse was coming on again,” Lopez said.

Ortiz said he did all he could when Bold Thunder ducked out.

“He surprised me when he did that,” Ortiz said.

Richard’s Boy is by Idiot Proof, out of the Cee’s Tizzy mare Marissa’s Joy, was bred by Harold and Pamela Tillema, is owned by Rockingham Ranch and trained by Peter Miller.

He has 10 wins in 23 starts, earnings of $759,680 and was coming off a win in the May 19 Jim McKay Turf Sprint Stakes at Pimlico, his first start since racing in Dubai.

Both horses were near the back of the pack nearing the far turn. Rainbow Heir moved up outside Oak Bluffs, and Karamanos took up sharply up entering the turn.

Karamanos thought Castellano put him in tight quarters entering the bend. Castellano maintained that he kept to his path and did not come inward. The stewards disallowed the objection.

Rainbow Heir rallied up the inside to finish a neck behind Richard’s Boy. It was a half-length back to Oak Bluffs, who rallied outside horses.