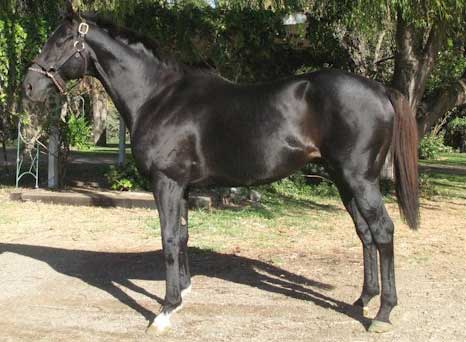 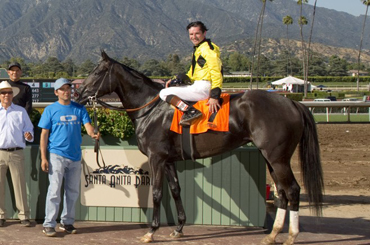 From Santa Anita Publicity
ARCADIA, Calif. (May 21, 2017)–Although beaten 2 ¼ lengths, fast improving Moonless Sky was awarded the win via a stewards’ disqualification in Sunday’s $125,000 Fran’s Valentine Stakes for Golden State Series eligible fillies and mares at Santa Anita. Trained by Eddie Truman and ridden by Kent Desormeaux, the 4-year-old California-bred daughter of Bold Chieftain got a mile on grass in 1:33.57.

In winning, 4-year-old Moonless Sky, who was originally based in south Florida, is now a perfect three for three in Truman’s barn and in addition to picking up her first stakes victory, she also provided her California-based sire Bold Chieftain with his first stakes winner as a stallion. She was bred by Willow Tree Farm.

Ridden by Flavien Prat, favored Pacific Heat, who rallied from last at the quarter pole, ducked in a furlong out, causing Moonless Sky, who appeared full of run, to break stride. Although impeded, Moonless Sky kept to her task, finishing second, a half length in front of Roo’s Valentine.

“Flavien’s mount ended up shoving me behind the horses that were in front of me, said Desormeaux. “I don’t think anyone can pass judgement on whether I was going to beat Pacific Heat or not, but I was deprived of that chance. Besides the incident in the stretch, it wasn’t the trip that I wanted. I was bottled up and loaded at the three and a half and I actually got space too late. She was loaded and ready to do much more earlier on.”

With Pacific Heat disqualified from the win and placed sixth in a field of seven fillies and mares three and up that were bred or sired in California, Moonless Sky, who was off at 6-1, paid $15.60, $8.20 and $5.00.

“We have about 30 people from Oregon down here to see this horse today,” said Truman of the group accompanying owner Pappas Racing. “I asked Kent about this race and she’s been doing so good, we thought she’d fit real well here and she did. She’s shown a lot of talent ever since we got her and as you can see, she’s really getting good.”

“We’ve owned horses with Eddie for about 14 years now and this is our first-ever stakes winner,” said owner Tom Pappas, who hails from Roseburg, Oregon. “She’s a good horse.”