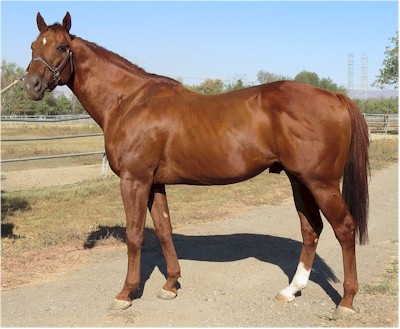 G. G. Ryder has a fair amount of inbreeding and linebreeding in his seven-cross pedigree.

The major crosses are – x3 Somethingroyal at 4 x 5 x 6 (Secretariat x2/Sir Gaylord); a double of Round Table 6 x 5 (Poker/Drumtop) plus another line of the family via Aureole (or Aloe x3); 5 x 5 to ¾ brothers Nearctic and T. V. Lark; Rough Shod II x2 via a 5 x 6 cross of half siblings Thong and Gambetta; multiples of Almahmoud via Natalma in Northern Dancer and Halo – multiples of Marchetta (1-W) via Turn-to x3 and Moonstone, and of Myrtlewood via Seattle Slew and Mr. Prospector.

Strengths – There are several good lines that can be augmented in this mix – more Seattle Slew is one of them, especially Slew City Slew as he carries another *Uvira II cross, the same as A.P. Indy’s family; more Rough Shod II (think Sadler’s Wells or Apalachee); any of A.P. Indy’s own close relations – Summer Squall, Lemon Drop Kid, Yes It’s True (Raja Baba) and so forth; Pancho Villa would be welcome to meet his sister Terlingua as would Royal Academy, a ¾ brother to Storm Cat. It’s Freezing is particularly valuable as he has crosses of *Boudoir II (think Graustark, His Majesty, Majestic Prince, Real Quiet) and Moonstone (think My Babu, Ambiorix, Alycidon, Irish River, etc.)

Few modern horses last as long as G. G. Ryder (64 starts). While he several times won or placed in G3 races, he never rose above that level to a more important G1 or G2. These numbers are important simply because G1 and G2 races are less likely to be re-classified from season to season, their place as tradition protects them.

On the other hand, G3 races being on the ‘bottom of the pile’ so to speak are far more likely to lose their grade because a G3 is not as prestigious. Having said that, G. G. Ryder performed very well at the G3 level over several seasons – thus proving himself a solid graded type and in total won or placed in 13 black-type events.

His rugged overall record assures mare owners that they are more likely to get one of his foals to the races, but sadly market breeders tend to shy away from these tough guys, preferring instead to breed to quick two-year-olds who win a G1 within three or four starts only to be immediately retired. To our way of thinking this is backwards and we believe horses like this one are very good for owners who like to race the horses they breed.

Another reason G. G. Ryder might not be commercial is that he earned all his black type in Northern California. Had he won or placed in a Southern California stakes it would have helped establish his racing class, as it is generally acknowledged that the saltier events are run in the southern part of the state.

G. G. Ryder is tail-male to *Nasrullah via the Seattle Slew/A.P. Indy stirp. That is the good news. The bad news is that his sire is a rather obscure A.P. Indy if such a thing can be said of that late, great once-in-a-lifetime horse.

There has to be a story behind Chhaya Dance, who sired G. G. Ryder but then ended up in Mexico where he has sired nothing else of note. A stakes winner himself, he is a ¾ brother to the late champion and Breeders’ Cup Juvenile Fillies winner Tempera.

The female half of his pedigree traces to the great foundation mare Mirawala (story attached). His dam was bred by Darley but his last recorded sale price was only $5,000. With a page like she has but such a low price, Stormy Gigi is obviously something less in the flesh than she is on paper. I saw her sire Storm Boot before his death and he was a charming, cobby little guy who often got hard-hitters of the G. G. Ryder variety.

G. G. Ryder’s lower earnings and lack of graded black type probably has to do with his having raced almost exclusively in Washington, though the folks in that state are normally very loyal to horses who do well there, especially to horses who are so beautifully bred. Either he was/is a ridgling – a frequent occurrence in the Seattle Slew line – and that bothered someone or he has some kind of defect – say cribbing – that caused him to be hard to sell.

Finally sold to Mexico, he has done absolutely nothing down there and one would think he might have had at least a little stake performer or two. This leads one to think that perhaps something happened to end his career and it was bad enough to be something that showed and marred his appearance.

He was bred to mares by Johannesburg, Cee’s Tizzy, In Excess, Smarty Jones, Kris S., and Cozzene, etc. Now any of those sires can have an ordinary daughter but it’s unlikely that all of them were terrible. Further, several attempts – with General Meeting and Event of the Year – were made to inbreed to Seattle Slew, which works very well as a general rule but which fell flat here.

You may know Chhaya Dance’s story, but on paper he is a horse who should have had a chance at minimum on the West Coast. He didn’t win much money – coming in just short of $100,000, so that might have hurt him but I still say it is very odd that a horse this well-bred was so ill-served by whoever owned him.

I have attached as previously stated my story and family chart on his tail female line of Mirawala. It is interesting to me that we currently have another member of this clan in Jersey Town standing in Northern California, as the family is not particularly plentiful.

It does, however, blend well with the Storm Cat blood of G. G. Ryder in a very good runner and up-and-coming sire named Get Stormy. G. G. Ryder and Get Stormy share another aspect in that Get Stormy has a Moccasin double (x2 to the family of Rough Shod II) and G. G. Hill also has this aspect though through different relations in Special and Thong. Thus they are quite alike in many ways but hardly carbon copies.

The family, however, is a tough and good one, though often prone to bad luck. When it is good (think Foolish Pleasure and his sister Nowmepache) it is very good indeed. There is much to be hopeful for with a family of this type and a good deal of it can be found on the grass and with patience. If those two elements are present, the class and strength of Mirawala will surge through the blood and show how capable it truly is.

As you might imagine, all these family lines have branched out into huge groups of horses so that we need to narrow the immediate family of the horse in question (here G. G. Ryder) to the closest, most important relative.

How lucky in the midst of all of those (mostly) good European females to find a stallion with enough speed like Sharpen Up from the immediate family that you can use to breed back to G. G. Ryder in order to strengthen the line. Diesis and Kris, full brothers by Sharpen Up are likely the easiest to find, but there are mare lines here and there that can help as well. Always try to find one that has at least one more family that aligns with the horse – like *Uvira II, A.P. Indy’s family for example.

You’d be unlikely to go wrong using those two impeccable crosses and he is especially important in light of two vital facts: One is that if one normally looks at what a horse’s sire likes we strike out with Chhaya Dance because G. G. Ryder is all he ever got. We next look at the immediate family (the first three dams) and discover that Storm Cat and Deputy Minister do well with the family. Which is fine, except that there were so many more of these than anything else we would expect to find Storm Cat and Deputy Minister, so is it a ‘fit/nick’ or is it simply a matter of ‘that’s all there is’.

You likely won’t be able to find all these horses, but if you find two or more you have effectively reinforced the best lines the family has to offer: They are *Uvira, Seattle Slew’s family and found in Seattle Dancer, Lomond, Lemon Drop Kid, Summer Squall, and Slew City Slew to mention some of the very best.

*Rough Shod II – Found via Thong and Gambetta in G. G. Ryder’s pedigree, Apalachee and Sadler’s Wells are likely going to be your go-to horses for the line in this next remove and they should be relatively easy to find. Lean toward the speed of Sadler’s Wells’ El Prado with Kitten’s Joy, who bred like his bottom line, that of Spectacular Bid and who has a double of *Rough Shod II himself thanks to his Sadler’s Wells/Lear Fan cross.

Crimson Saint – Fast but sound is a very nice combination and Crimson Saint gives you this. She is represented in G. G. Ryder’s pedigree via Storm Cat – look for his ¾ brother Royal Academy; Terlingua’s brother Pancho Villa and using Crimson Satan’s bottom line, Tiznow, who descends from the same family (*Papila).

It’s Freezing – You’ll be looking for Quack primarily, and he’s not easy to find, but he’s out there, and Irish River who is inbred to the family of Rose Red. Most of his get are also quite sound and unique looking little packages, very different from his sire, Riverman.

Sharpen Up – Explained above. He had everything – a speed horse that sired a Prix de l’Arc de Triomphe winner (Trempolino), who had a delightful disposition and whose get lasted and could handle any surface. This is to align with G. G. Ryder’s own female line of Mirawala.