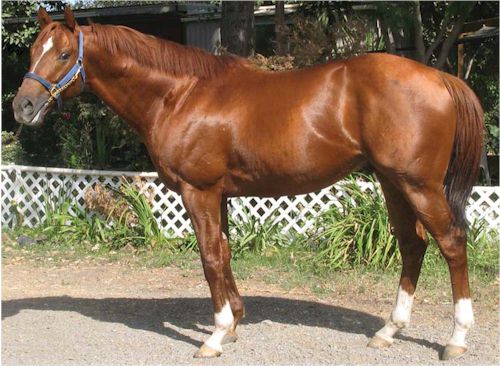 MANY RIVERS, chestnut, 2005, Storm Cat-Christmas in Aiken, by Affirmed.
Property of a Partnership Fee: $3,000

Stakes-placed as a juvenile and a wire-to-wire multiple winning 3/4 brother to sire Harlan’s Holiday!

By Blood-Horse Staff
ALBANY, CA (December 14, 2014)-Many Routes became the first winner for sire Many Rivers when he came from off the pace to win the first race Dec. 14 at Golden Gate Fields.

The initial victory for Many Routes came in a $12,500 maiden claiming event by a head. The chestnut gelding is out of the multiple winner Mood Route, by Mud Route.

Bred and owned by Jerry and Margaret Martin, Many Routes is trained by Ellen Jackson, who stands Many Rivers at Victory Rose Thoroughbreds near Vacaville, Calif.

Many Rivers, whose fee was $3,000 in 2014, is a Storm Cat half brother to grade I winner and sire Harlan’s Holiday. He was produced by the Affirmed mare Christmas in Aiken.

Stakes-placed during his 18-race career, Many Rivers has 11 2-year-olds in his first crop.

MANY RIVERS
Storm Cat-Christmas in Aiken by Affirmed
Ellen Parker

I would not be terribly surprised if it is suggested to you that you consider lines which have worked with Harlan’s Holiday, but these seem to me to be two very different kinds of individuals. As you might imagine, you’ll find a lot of Mr. Prospector-line mares in Harlan’s Holiday’s resume but he has a good one (Tasha’s Miracle) from a Relaunch (think Bertrando and Cee’s Tizzy/Tiznow) mare, too. Plus, arguably his best offspring, Denis of Cork, has Pirate’s Bounty for the broodmare sire of his second dam and you can’t get more California than that and his top earner, Into Mischief, is out of a Tricky Creek (Icecapade-line) mare, from the same #23-B family as Affirmed, just a different branch.