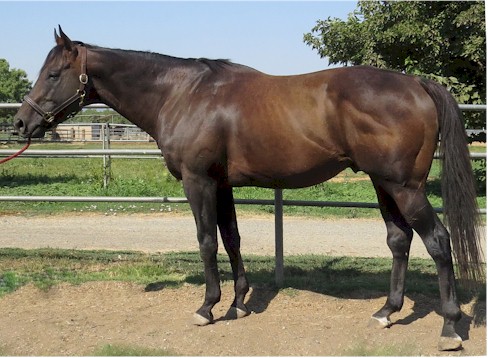 Unionize descends from the Dixieland Band stirp of Northern Dancer via G1 winner Dixie Union. Dixieland Band, one of the original Lane’s End sires, lived out his life to the grand old age of 30 at that farm where he is buried. During his lifetime he sired 117 stakes winners, the best of which was probably Dixie Union, who also stood at the farm. The sire and his best son both died in 2010, Dixie Union from a neurological condition. Dixieland Band was also an outstanding broodmare sire. Two of his daughters produced Kentucky Derby winners Street Sense and Monarchos.

Dixie Union descended from the same family as Cozzene and Zavata. Portions of the Paintbrush line were West coast based. She’s Tops had a full brother named He’s Tops who stood in Washington state and several descendants of Paintbrush and She’s a Talent were bred to horses like Pirate’s Bounty and Bertrando, so they likely were in the hands of the Wygods at some point in time.

Dixie Union has no sisters to use for linbreeding, as She’s Tops produced no females. Thus Zavata (who was exported to Saudi Arabia) daughters would be the most closely related. But Cozzene would work even better I would think, to add his Caro blood to the Mr. Prospector in Dixie Union.

I just saw Union Rags yesterday and he is a scopier version of his sire. He is off to a fast start and inbreeding to Seattle Slew, Mr. Prospector, Gone West and Round Table all have worked with him so far.

I don’t believe that this particular line fits Dixie Union very well. The tail line is to Merrylips. This is another branch of the same family as Rough Shod II (Toxophilite Mare, his 16th dam, is the 7th dam of Rough Shod II).

That is where the similarity ends. The line is Chilean and was exported when Chilean classic winner Viga (CHI) was imported and bred to Pirate’s Bounty to get Brisa de Mar who placed in several minor stakes in Northern California.

The remainder of the family was clearly owned by the Wygods. Two of the best were by Benchmark – Unionize’s dam Silent Sighs (G1) and G2 winner and G1 placed Proposed, the latter dam of G3 placed Floral Romance by After Market.

Since the dam, Silent Sighs is inbred to The Axe II (via daughters Cold Hearted and Foggy Note) and Seattle Slew in Dixie Union’s contribution are inbred to La Troienne or direct descendants, there are multiple lines of this great foundation mare.

His dam is a G1 winner and his sire is off to a good start as a sire of sires.

There are several things to overcome – One is the impression that he is a ‘hard knocker’ that did not show the brilliance most breeders are looking for, another is that there is already a son of Dixie Union, Dixie Chatter, in Southern California who is a G2 winner that traces to Tapit’s family and already has sired a couple of minor stakes winners. Finally, his tail-female line is an odd Chilean clan that has never produced a solid sire. That’s a lot to overcome, so you’ll have to sweeten the pot.

For example, have the owner offer a bonus to the first person who gets a graded stakes winner by Unionize, or offer a lifetime breeding. It appears that the Wygods still have a share in Dixie Chatter, too, so there is the challenge to prove that this horse is not a cull.

As always, more than one cross of a good family is always best and all final choices should be made based on conformation. If this horse is typical of the Dixieland Bands he is medium-sized golden bay and on the plain side. If he is more like the Dixie Unions then he will show some of the Capote and be darker and have more range and scope like the Seattle Slews.

Zavata – To align with She’s A Talent

Advocator and Roberto to align with Delta Judge in Dixieland Band

Sabin, Magic of Life – to align with Warfare’s 4-M contribution

Gentlemen (ARG) – to align with Danzig

Yankee Gentleman and Half Ours – to align with Pirate’s Bounty

Grand Slam, Give Me Strength, Raise a Cup, Our Mims and
Forward Pass to align with Alydar

More Seattle Slew would be welcome, preferably via a daughter, but with a double of Raise a Native already in play, be more careful when adding Mr. Prospector. The pair combined are very powerful as they created inbreeding to Frizette, Humanity and Lady Comfey – all outstanding foundation matrons.

MANY RIVERS
Scroll to top